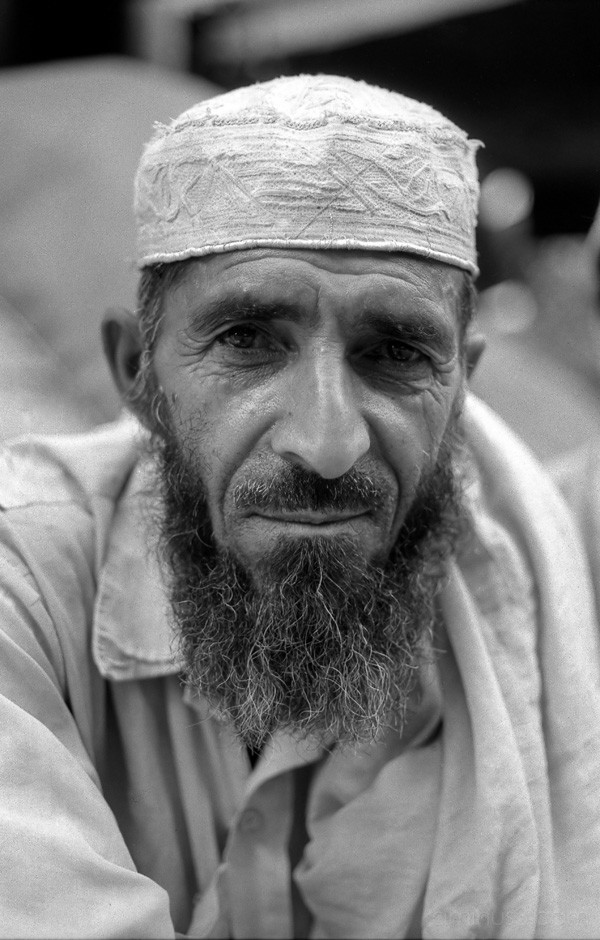 Whilst rummaging through some old negatives shoved away in the loft, I found a set of B&W negs that I shot in Karachi in Pakistan about 19 years ago. Although most were scratched or covered in dust, I had a go at scanning a few (after I processed them 18 yrs ago, I never got round to looking through them or printing any). It was amazing to see these long neglected images come to life on the screen, temporarily forgotten for all those years. Its been a very hard job cleaning them up in photoshop, and their far from perfect, but I thought I'd preserve a few here in cyberspace. I remember that I bought the film stock in Karachi, and that it was 35mm film manufactered in what was then East Germany. The film stock was already about ten years out of date when I bought it, and when I processed it about a year later (I remember posting the films back to England and they arrived after about a year....) I had to guess the developing time as the film was of such an unknown type.

Anyway, this is the final Karachi image I'll post this week.

Wow that is awesome to look that clean and be that old!!! Great job!

This is one of the BEST portraits on am3, BRAVO, thanks for sharing after all these years

Another superb portrait Richard! Very well framed and beautiful use of aperture!

And after all that time and care and fiddling, look at the fantastic result. Well done!

He has such sad eyes! Your framing is superb in this image. How did you get them to let you shoot them so close?

Seriously, this is something you'd see in Nat'l Geo. Outstanding!!

Awesome and amazing shot. You have done it.

Absolutely first-class portrait. Such a lasting impression he leaves on the mind. Bravo, Richard!!

wow what a portrait. agree with amy. i absolutely love this shot.

But it's really fantastic! Well worth all your painstaking work.

i love the comment you made on the image. the great photo that was lost for a moment and now rejuvenated and brought back to life. I can understand the hard work into restoring old photographs.

But after all that hard work, it sure did pay off!

the image is amazing, the details are SO sharp, from the eyes to the lines on the face to the single strands of hair.
Amazing.

You rediscovered a treasure and the work involved was absolutely worth it.
Fabulous portraits full of character, emotions and pride.
Congrats, your are on the spotlight frontpage ;)
http://www.aminus3.com/

One of the best b&w portraits I've seen for a long time! Wonderful the way you've captured the esense here, and excellent from the technical point of view, too.

This photo is so rich and expressive. It makes me want to know more about the man in the photo. It definitely draws you in!

Pakistan... Such a beautiful place to make portraits.

great portrait in a great shot
congratulations for your job
napo

larry from somewhere in, Singapore

Love the B&W, and the eye contact. Nice and honest portrait.