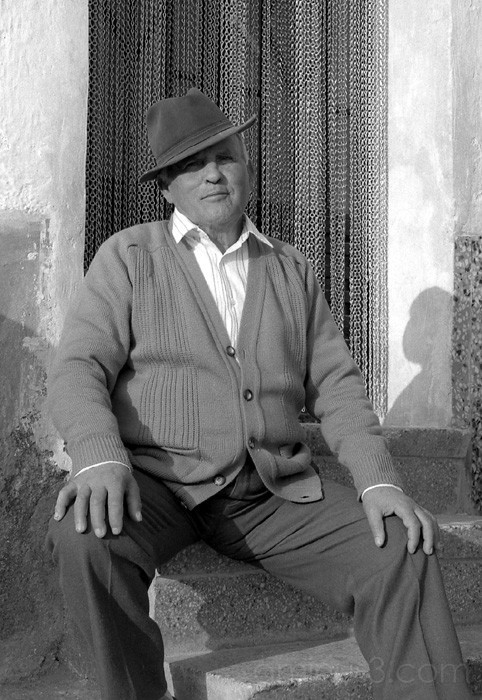 I stayed in Yegen for some time, so people got used to me asking to take their portraits.

All images come from a photostory I made in the village of Yegen in the Alpujarra region of southern Spain. All the images date from the end of 1989 and ran through into 1990, and my last visit to Yegen was in 1991, so I do not know how much has changed in the following years. I picked Yegen as my study after reading the book 'South from Granada', by the English author Gerald Brenan. He described his life in Yegen, and the colourful characters who lived there, many of whom were still alive in 1989, and featured in some of the photo's I took. Back in 1989, this region of Spain was fairly remote from the holiday home buying Northern Europeans, so retained most of its unique culture and ways The terrain is very steep, with desert like ravines at the lower slopes and snow capped peaks above.

his attitude comes through

I'm glad they got comfortable enough with you. Great portrait.

the hat says a lot about this guy.. always love your portraits

Great portrait! You captured a lot of personality there!!!

Striking portrait and the contrast balance is very good. As with all good portraits, there seems to be a long, interesting story here.

cool portrait, what a pose

And this is a great portrait – full of personality and charisma!

He looks like a cool guy. :-) Really beautiful capture. Am just so bowled over by that pose and fantastic expression :)

Well done for sure. Pretty impressive series so far.

Talk about old country.. Brilliant portrait, Richard! He looks so relaxed and not posed.