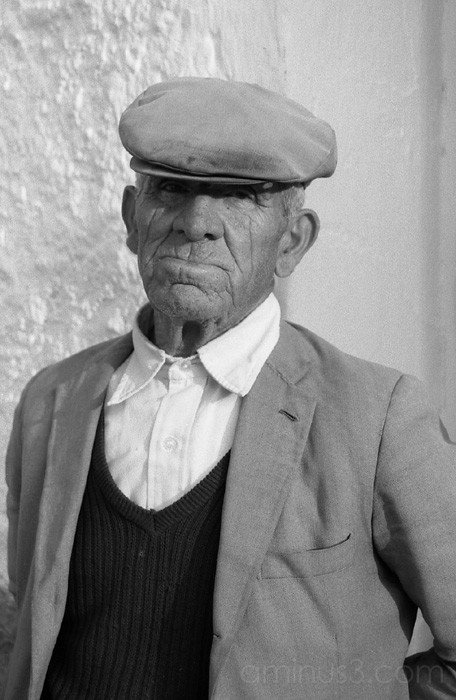 The older people in Yegen knew Gerald Brenan, the English author, and many were featured in his book, 'South from Granada'. They were just small children when he wrote about them.

All images come from a photostory I made in the village of Yegen in the Alpujarra region of southern Spain. All the images date from the end of 1989 and ran through into 1990, and my last visit to Yegen was in 1991, so I do not know how much has changed in the following years. I picked Yegen as my study after reading the book 'South from Granada', by the English author Gerald Brenan. He described his life in Yegen, and the colourful characters who lived there, many of whom were still alive in 1989, and featured in some of the photo's I took. Back in 1989, this region of Spain was fairly remote from the holiday home buying Northern Europeans, so retained most of its unique culture and ways The terrain is very steep, with desert like ravines at the lower slopes and snow capped peaks above.

Another beautiful and poignant portrait.

His face has a lot of character. Another good one.

This is a fantastic portrait. The kind that has stories to tell. Love the expression and the detail. This one has life. Congratulations.

Anne from White Rock, BC, Canada

Beautiful portrait and the portrait of the woman yesterday! Such character in their faces! I love these kind of shots of the aged and you do it so well! :-)

Very nice work...truly a story in this photo.

Nice portraits series indeed!In this one I really like the shape of his mouth(lips)!:)

Giving Keith Richards a run for his money.

Another fine portrait! You captured his character perfectly!

this is a nice one. He looks like a tough old bird.

A face full of character.

You can see his life in his face a wonderful portrait Richard.

The opposite of the previous!
However it is the same professional!

Really truly stupendous portrait yet again, and wonderful details. May I say thank you so much too for all your kind words and well wishes, past and present, at my blog. I really appreciate them.

he really has a face that seems to have stood the test of time. I wonder what his story is.

A lot of life in that face... Another absolutely brilliant portrait Richard.

I bet he's seen a lot of cool stuff in his days! I am jealous! :) Great shot!