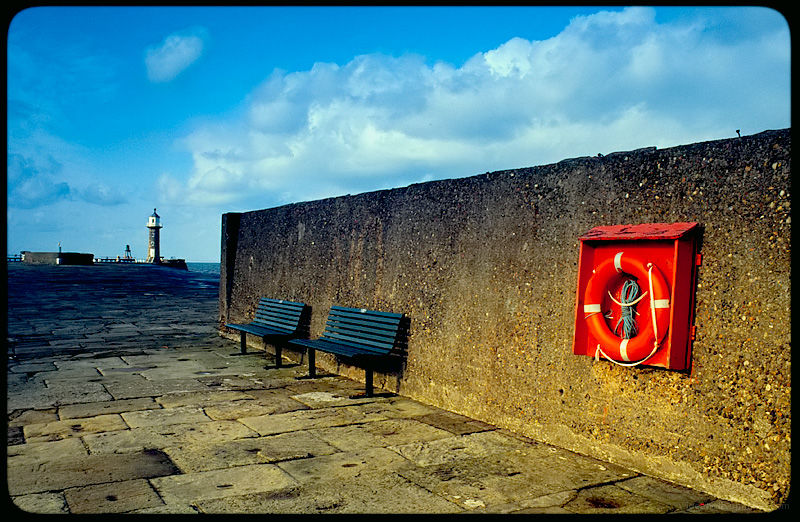 The following few shots were all taken in the town of Whitby, North Yorkshire mostly using Kodachrome slide film, but also some Ektachrome too.
I bought up a stock of 'out of date' Kodachrome film way back in 1998, and it was already out of date by a couple of years on purchase. It's been sat about in a box at home unused for ever it seems. However, Kodak are just still doing their Kodachrome processing (in Kansas I believe), and so these shots arrived back home last week with that distinctive Kodachrome colour that I remember from using it years ago. It came back with cardboard slide holders with rounded edges, which I scanned with the images, which made interesting, but slightly rough borders.
For me, those colours create a slightly 'retro' look, perhaps it was the fact that the film was so out of date to start with.

These were all taken on a manual everything Nikon FM2.
Ektachrome & semi grad blue lens filter

throw me the life saver!

Wow, what color. Perfect subjects for a classic film. Great light and geometry too, with the wall making a wedge straight into the right side of the frame.

Nostalgic and such a delightful result. Those colors are so punchy and you chose a perfect scene to demo the old Ekta !

I love this series of shots Richard, the colour and composition are fantastic.

Great shot Richard...
The colors are vivid and seems so pretty...Cool Captured

Neat shot. Lovely colors. I like that beacon in the background.

Yours colors ! Your textures ! Your treatment ! You're great*

Superb ! The composition and edit are very good.

Very good detail and colors. Maybe a little bit strong blue in the left side.

amazing color! how could they discontinue this film! great composition too.

Love the old vintage colors, and you chose a good subject to shoot - back then.

Great photo - and what an exposure! Slide film can be tricky. I love the color and saturation, and I'm sure some of it is lost online. I'm sure it looks awesome in person. As wonderful as digital is, sometimes I think it lacks the feel of film.

Brilliant! Thanks for having the opportunity of seeing such a great work and somehow learning from it.

great composition! i like the warmish light, colour and excellet textures and detail!

Francesc B. from région parisienne, France

Excellent colors... incredible with an old film... I like the result.

Great eye -- what a well composed shot of this very interesting place.