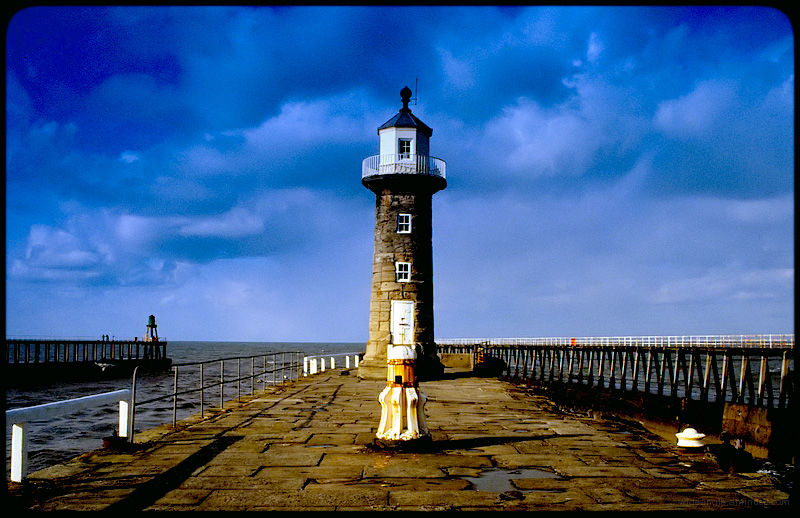 The following few shots were all taken in the town of Whitby, North Yorkshire mostly using Kodachrome slide film, but also some Ektachrome too.
I bought up a stock of 'out of date' Kodachrome film way back in 1998, and it was already out of date by a couple of years on purchase. It's been sat about in a box at home unused for ever it seems. However, Kodak are just still doing their Kodachrome processing (in Kansas I believe), and so these shots arrived back home last week with that distinctive Kodachrome colour that I remember from using it years ago. It came back with cardboard slide holders with rounded edges, which I scanned with the images, which made interesting, but slightly rough borders.
For me, those colours create a slightly 'retro' look, perhaps it was the fact that the film was so out of date to start with.

These were all taken on a manual everything Nikon FM2.

This is just stunning! I love the colour and of course your composition. Ah! The Nikon FM2! A classic camera, and (also) an old friend of mine. This inspires me...perhaps some film this weekend!

How beautiful. And those blues!

Surreal touch from that blue!

Francesc B. from région parisienne, France

@Francesc B.: Thanks Francesc. My first SLR Nikon was a lovely Nikkormat Ftn, followed by an FM, an FE, an FM2, a D70, and finally an F100. My next Nikon will be a replacement for my D70, but I'm in no hurry as yet to replace it, and my favorite Nikon is the F100.

You have a great series going here. This may be might favorite so far. That stone lighthouse is gorgeous and the sky leaves me speechless.

@Steve Rice: Thanks Steve. I have lots more shots from my visit to Whitby, but this is the last for now on AM3. It snowed here this weekend, so tomorrows pic is of the snowfall, as it has been a rare occurrence over here, and our couple of inches of snow is the heaviest fall for 19 years.....LOL

Great perspective and colors Richard. I like this one very much!

love it. this color is amazing.

Exquisite photo charming, stunning and the 'technical' aspect of it is superior, wow

Excellent. I like rule breaking the idea here and putting the subject in the middle.

Brilliant color in this one takes on the aspect of HDR....

Saturation and tonal range to die for . . happy days.

Nice shot, but where does the Kodachrome thing tie in??....? Curvy borders and cranked colour don't add up.